ANNAPOLIS, Md. – The Thomas Point Shoal Light is the last screw-pile lighthouse on its original foundation in the United States and the last lighthouse that Coast Guardsmen served in on the Chesapeake Bay

Until 1986, U.S. Coast Guardsmen served on the offshore light that is located south of Annapolis, Maryland’s state capital.

“The lighthouse marks the shoals at the entrance to Annapolis,” said Senior Chief Petty Officer John Kopp, the officer-in-charge of Aids to Navigation Team Baltimore, the team that maintains the light.

Kopp said the other Chesapeake Bay screw-pile lighthouses have been destroyed or moved to shore-side museums. A native of Philadelphia, Kopp leads the 20-person ATON team that maintains 508 primary Aids to Navigation, including six major lights and 42 range lights.

The U.S. Lighthouse Society hosts the tours of the Thomas Point Lighthouse between June and October every year. The tours depart from the Annapolis Maritime Museum. 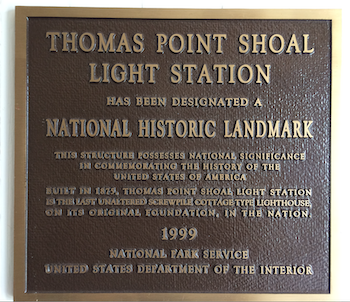 According to Jeff Gales from the U.S. Lighthouse Society Headquarters, more than 2,000 people have visited the lighthouse since it first opened for tours in 2007.

“The Thomas Point Shoal project is a special and unique partnership between us, Anne Arundel County and the Annapolis Maritime Museum,” said Gales, who has worked at the U.S. Lighthouse Society Headquarters for 14 years.

“One of the things that makes this region unique is that most of our work is on an estuary and the 150 rivers and streams that feed into it,” said Runt. “We also are located in a region where we contend with the damage done by both hurricanes in the summer and ice in the winter.”

In the past, ice floes wreaked havoc on the screw-pile lighthouses on the Chesapeake Bay. Ice has damaged, destroyed and sometimes set them adrift. In 1881, the Sharps Island Lighthouse was knocked off its foundation by an ice floe and drifted for more than 16 hours with its keepers still inside until it ran aground almost five miles away.

Over the years, rock rip-rap and ice breakers were installed to protect the Thomas Point Light from ice floes.

“The Thomas Point Shoal Lighthouse was intentionally designed to withstand the forces that ice puts on our structures,” said Runt. “The rock rip-rap was added to shield the legs from the moving ice.”

“The lens represents our shared history, both ATON and maritime, on the Chesapeake Bay,” said Runt. “Our current ATON crews are trusted to maintain the Aids to Navigation with the same dedication as the crews that have come before us for the last 230 years.” 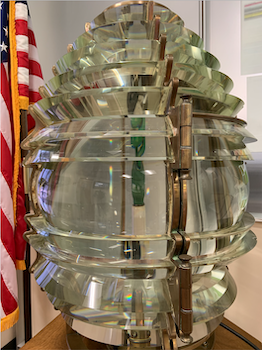 Captain Santa and the Christmas Tree Ship lost on her last voyage.

Effective May 1, 2019 any maritime facility regulated by the Coast Guard must provide fast and free access to mariners

Crosby shackle warns users to take shackles out of service